“We had a cup of tea at his home place in West London. It was a cold but sunny November afternoon when we did the photos. I wanted the image to be of Jordan just being himself. We always see the fun and up beat Rizzle Kicks releases, so I was interested to be with the Jordan that you meet when he’s at home. With a very real and laid back head on his shoulders, and a hunger to achieve as best he can, Jordan is a really down to earth guy to know. Creatively minded and a strong interest in what is going on in the world today there’s not much that gets past this guy unnoticed. An unquenchable thirst for fun, but a very tough work ethic. He’s a health conscious man with a spark to always get the best out of life. While having his gluten free breakfast before heading to the studio for some more recording, we started on the photos. Work hard, play hard and party hard…right!? Exactly. We got the old ghetto blaster out that he used in the music video for Lost Generation and it appears in some of the other videos too. I love it. Retro meanings in all aspects of music, film and imagery.

I was interested to learn that Jordan is also working on a side project creating some of his own indie music under the name of “Wildhood”. While taking the photos we listened to some of his own songs… exciting times. Loved them. With a voice that carries such a powerful message of what life has thrown at him so far, the tracks both lyrically and in their delivery are really strong. Every single one of them. With such a humble approach to his own music, it’s great to see what he is producing.

Jordan has signed and titled his image for the collection “Rise and Shine” after one of his own songs. This track won’t be released for quite some time so you will have to wait to hear it! Lovely that he chose to name this image after these lyrics. The first album from “Wildhood” will be coming out really soon at the beginning of March 2016 so look out for it! Thank you Jordan, it has been a pleasure. Rock’n’roll to the core. Peace always x”

The print is black and white and has been done on a fine art silk screen process with Diamond Dust. An effect often used by Sir Peter Blake and Damien Hirst. The glitter of the diamond dust represents the glitz and the glamour of rock’n’roll life. The black and white image behind it represents the true journey of the artist who will not give up on what they believe in.

For more information or to purchase the signed original print by Jordan Stephens and Gem Rey, please enquire. 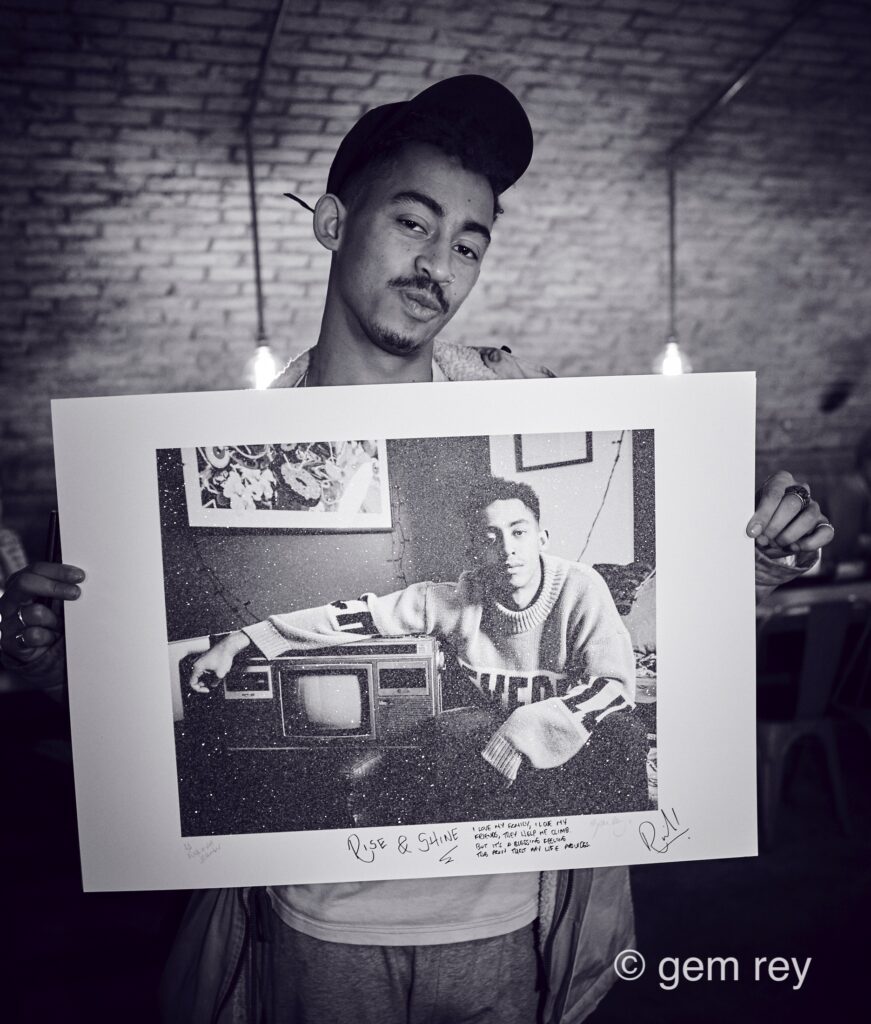 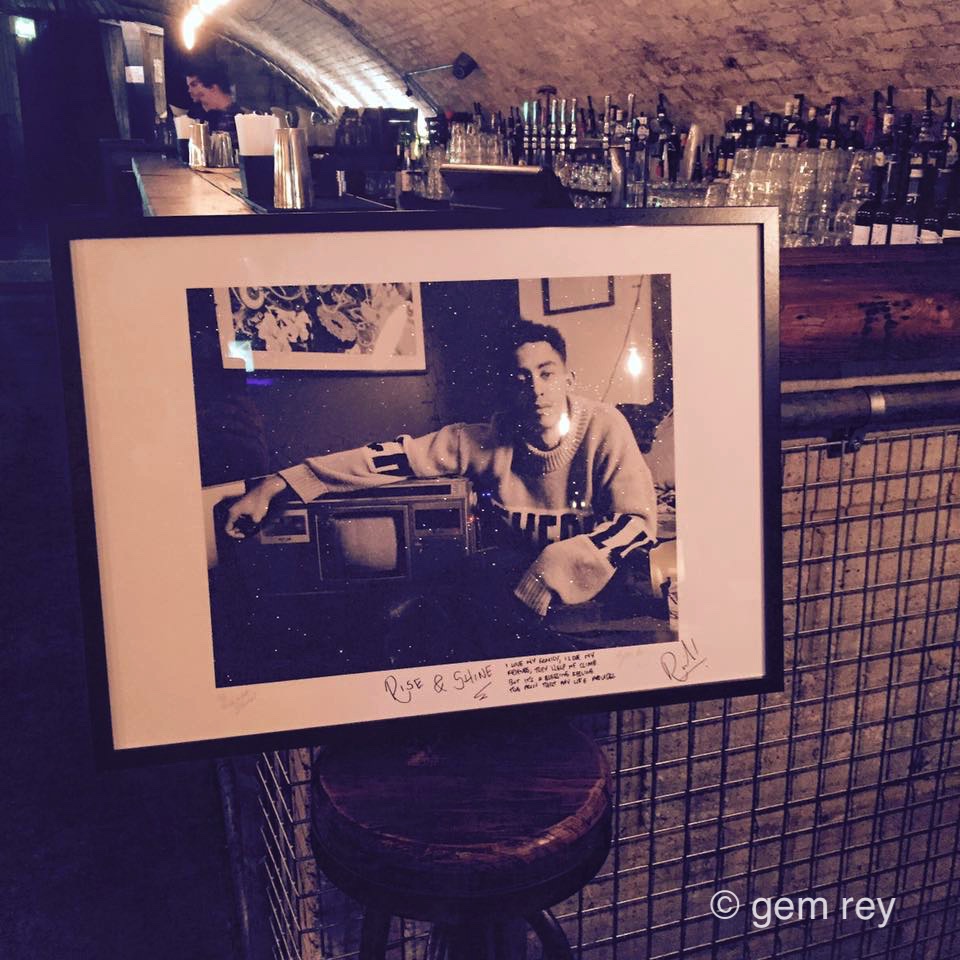 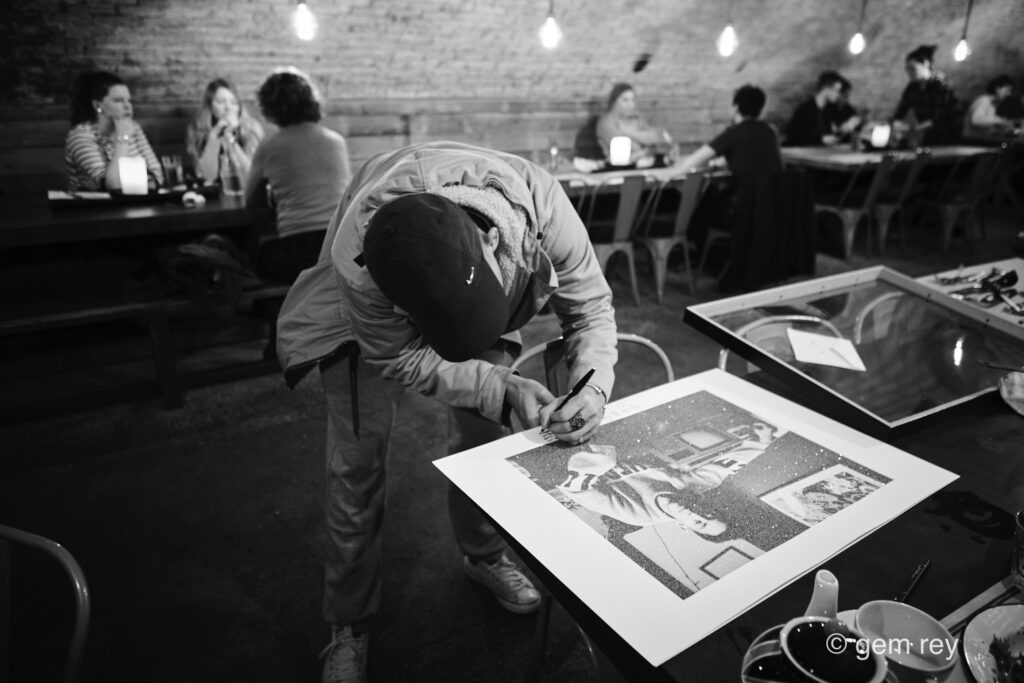 The signing took place here in London at the Putney Pies / Putney Vault bar with special thanks to Matt & Dorothee.