Only a couple of months ago I was in Miami doing a photoshoot. Those of you who have been there will be familiar with Ocean Drive. The famous strip by South Beach where everyone and anyone will go to be seen. It’s rammed with pimped out cars, bling cha ching, giant cocktails and neon everything. Now I find myself walking along the river front here in Phnom Penh, Cambodia. So different, yet, not so different. I looked around and could see how this main stretch, at a glance, could so easily have that buzz that America, or any other country for that matter has. Same basic structure of the tourist strip. But the BIG difference is, this is Cambodia. Yes, it has lots of bars and restaurants and flashing neon lights all the way along this main road by the promenade. There are palm trees lit up at night, the Royal Palace is close by looking pretty. You only have to cast your eyes a couple of metres left or right of one bar or restaurant, to then fall upon a rubbish heap that has street kids and adults searching for food, or a tuk tuk full of deep fried cockroaches, steamed snails with an elderly or even a tiny child desperately trying to make one dollar to just get by. A lonely soul bathing in a market stall or sitting on the ground on the side of the road just watching the world go by. Tuk tuk’s and scooters everywhere. A disabled guy struggling to move let alone eat. I walked along the river front. I like being near water so this was a welcome atmosphere to me. The air going from lovely local food smells, to sudden barely breathable engulfing heavy stenches of what no one can escape from doing as nature intended, but with no choice on where to do it. The diversity of my surroundings had couples walking along the promenade, to children scampering along going from restaurant to restaurant to sell the bracelets their Mother made with the word “Cambodia” or “Good Luck” in the stitching. Even if she spelt it wrong, who cares, she tried, and she made something. The children are so young, yet their banter could sell ice to eskimos if they were ever given the chance. Chance. It should not be left to chance. This is 2016…

As I took in my surroundings I was aware of a noise close by of wheels and quick footsteps on the paving slabs. I turned, “you want water? Coca cola? Drink?” There was this trolly full to the brim of ice and drinks cans pushed along by a young boy. He was only just tall enough to push this trolly along. It was dark, about 10pm and here he was, running along to sell some cans. I said “no thank you”. He carried on. Then suddenly my heart just panged, I couldn’t ignore it. It wasn’t about whether I want a drink, it was about whether that boy could earn something so he could stop working for that day and rest. I watched him scampering along and something inside me just said, “Go! Buy something!” So I ran after him. His English was brilliant, he was 8 years old. So much sparkle and life in his attitude to life. I felt inspired by him within seconds. Not long after, another boy appeared. This one looked different though. He said “This is my brother.” The brother just looked at me, his eyes so glassy and so much to say, but no words. He didn’t have to. I could read the pain in those eyes in a moment. It was time to go, I paid the one I had been chatting to what I owed plus a tip as I took some photographs. I showed him the photos. He smiled. He liked them. I asked, “what is your name?” He replied, “Monet”. He event spelt it for me. “Wow!” I said. “You have a very great name.” 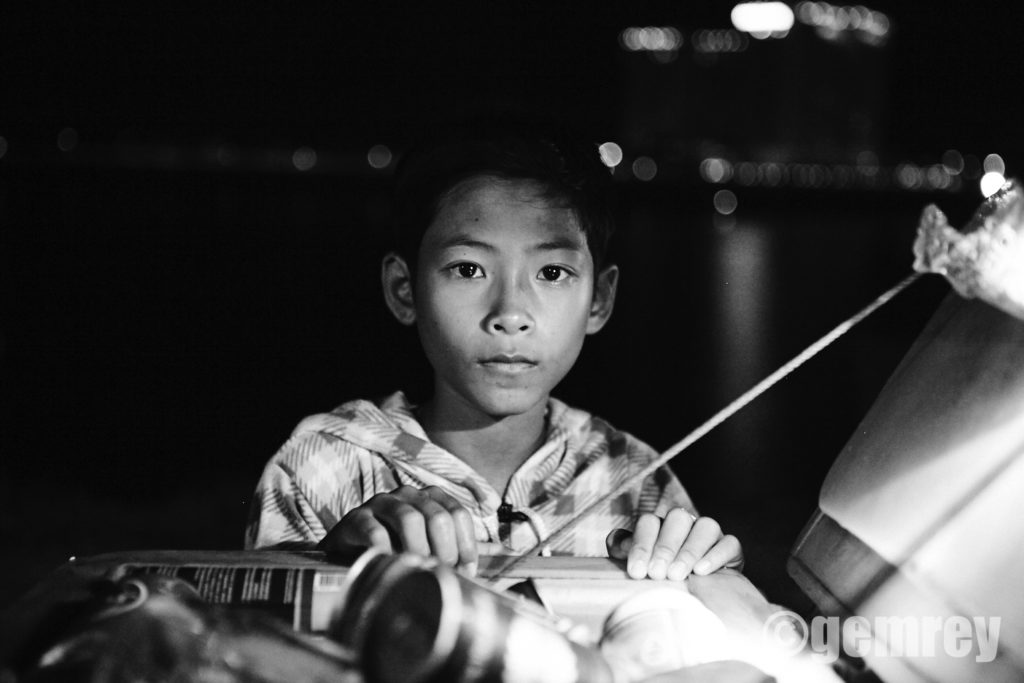 This image is copyrighted to ©gemrey and is part of a collection of unseen images of Cambodia.